The Future of Salesforce Flows

I recently attended an event where a rough roadmap of upcoming flow features was shown. I got this screenshot. All the normal caveats apply that at the point I took this none of these releases were finalised. However, I believe everything intended for Summer ‘21 has been released, so hopefully that sets the precedent for the rest. 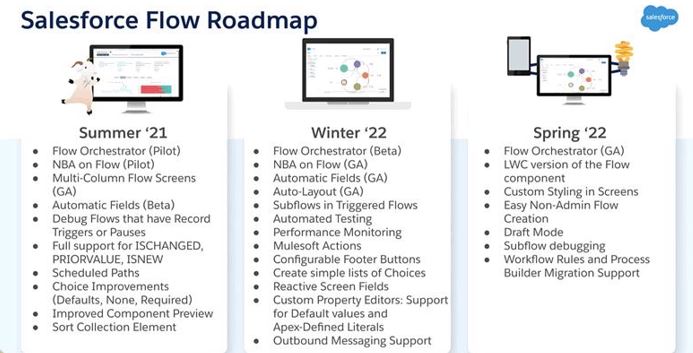 It looks like we have some interesting things coming up in the Winter and Spring ‘22 releases. I’ll call out a few that I think are really exciting here.

Firstly, more of us will be able to get our hands on Flow Orchestrator which should be an amazing tool to connect together multiple flows (and more) into complex business processes. We’ll publish more on this as it becomes clearer but what we know so far mentions a lot about approvals – so are classic style approval processes changing? This will be interesting to see.

Second, in Winter ‘22 it says we can use subflows in triggered flows. This is very important as it will allow your actions to be separate from the trigger and so re-usable. For example, you want to total up the number of opportunities related to an account, rollup summary style, but since it isn’t a master detail we’re using flow. In order to handle deletion of opportunities we must have two flows that do the counting, so the logic to count the opportunities is built twice. This sounds like we’ll be able to build the counter once and just call it as a subflow from two different flows used as triggers. Now, when we want to change the calculations slightly (perhaps to exclude a certain record type or status for example), we only have to change it in one place. This is a simple example but the time saved grows massively with complexity.

Next, I’ll pick out another Winter ‘22 listed feature, Configurable Footer Buttons. Now I don’t know what this will actually do but at the least I’d hope it will allow us to rename the buttons. Perhaps conditional visibility could be there – for example the “Next” button (now labelled “Accept and Proceed”), doesn’t show until you tick the box to accept the disclaimer. What if we can redirect to custom URLs with the Finish button easily. Great options here for UI improvements.

Finally, a feature that is just another confirmation of what we already knew – process builders and workflows are done from Salesforce’s perspective. They are releasing migration support in Spring ‘22. It isn’t clear what this is, but presumably some kind of migration tool to transfer your existing automations into flow with a few clicks, or at least to identify and call out the areas that need work. We’ve had quite a few years now where there have been multiple methods of creating automations in Salesforce and maintaining best practice of only using one has been very difficult as they’ve not all had a comparable feature set and there hasn’t been anywhere to easily see everything on one screen. I hope this feature means it’ll be practical for admins to achieve best practice.

There are lots more things on here that I’ve not mentioned (automated testing for one) so certainly a lot to keep an eye on over the coming months.

Want to know how to make the best use of flow now? Get in contact to see what we can do to help you with that, or any other Salesforce work.