Now as we know, the Salesforce update cycle consists of 3 major releases: Spring, Summer, Winter. With these releases we often see the big changes implemented! New features, upgrades, bug fixes, and more! But occasionally, just occasionally, it’s the little things that make all the difference – and it’s perfectly acceptable to get excited about these little things!

Up until now, when working with Screen Flows, we as admins have been limited to the standard navigation labels. Next. Previous. Pause. Finish. And the only way to customise the navigation buttons would be to install a package – which you may have done yourself after the requests come in to reword them in order to make the navigation clearer to your users…

Well in Winter ’22 Salesforce is releasing an update to allow you to “Customize Button Labels in the Flow Screen Footer”! Now whilst this is only a Beta, and seemingly only a small feature – it makes me very excited.

This kind of update is exactly the kind of thing that makes our lives a little easier and something I’m sure DJ Casper would be happy about when building a flow in Salesforce…. 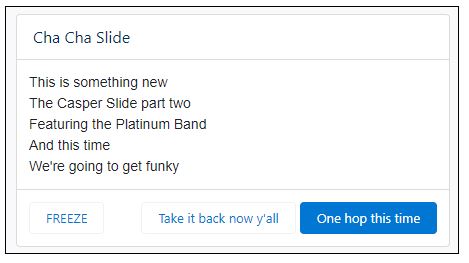 As well as this seemingly rather small (but very significant change!), Salesforce has also deployed various other updates relating to Flows:

These are just a small handful of the extremely useful features and updates coming to flows in the Winter ’22 release – and we can’t wait for them!

If you need help with your Flows, just contact us.